Digital Arts Studio is honored to be involved with the Profiles of Poverty exhibit scheduled to open in Colony Square August 5th.  We were asked to print and frame over 50 photos for the exhibit.  The photos are a powerful reminder of those individuals who go undetected by the general population.  Please make a point of visiting the exhibit while on display for the month of August.  Our very own Digital Arts Studio co-owner Barry Glustoff is honored to have one of his photos included in this exhibit! 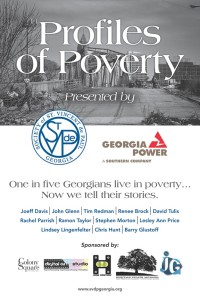 “Some 1.8 million Georgians currently live below the federal poverty level. Despite these large numbers, too often the plight of the most unfortunate among us is hidden or simply ignored.

The exhibit depicts the issues affecting the poor, including homelessness, hunger, healthcare accessibility, homebound seniors and unemployment. Despite the seriousness of the subject matter, the exhibit captures the indomitable spirit of many in tough situations, their moments of hope in the midst of despair.

The gallery will be on display at Colony Square for the month of August. We invite you to the opening reception event on Tuesday, August 5 at 5:00-7:30 p.m.”